~ A righteous man has regard for the life of his beast ~
Proverbs 12:10

The dogs got in for a third time. Patrick got the worse of it. There are no puncture wounds, as both of the Boyz were able to get up on a four inch ledge all three (so far) times. I don't know how long they had to stand there each time but this time he is limping.

Unfortunately, both of them have bruised pads, and Patrick has gone lame in front left leg. Doctor said he has some arthritis, but he has never limped before this. His feet were bruised so bad, she wrapped them with medicine inside the bandages. He didn't care for the back one, but kept the front one on, as he couldn't get to it. My daughter and I managed to get it off yesterday. 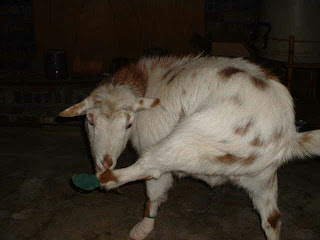 He and Bob spent the night in the basement, but he wanted out (tries real hard to turn that door knob!) I let him out the next day, Tuesday, but he is not better today, Thursday. Hopefully he will start using his leg, if he doesn't he will never be able to escape the dogs, and my son and I reinforced my fence as well as we could. 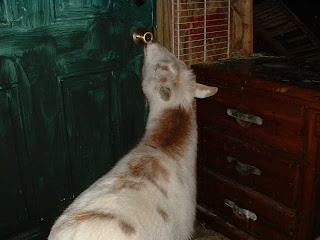 I'm very concerned about him. I'm very scared for both of them. 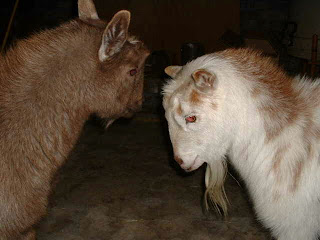 I can't let them be together, as Bob wants to play and Patrick definitely does not!
Posted by Cats~Goats~Quotes at 5:01 PM