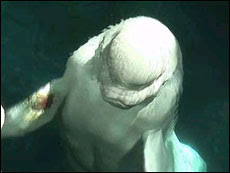 Gasper had been ill prior to arriving at the Georgia Aquarium in October, 2005. He was severely underweight and had visible skin lesions. Gasper was later diagnosed with osteomyelitis, an infection of the bone.

In the past few days, Gasper's physical condition declined rapidly.

Recognizing Gasper's failing health and with quality of life in mind, the Georgia Aquarium's veterinarian team made the hard decision to humanely euthanize the whale.

"We rescued Gasper knowing that he was seriously ill, but were hopeful that we might have been able to save him," said said Bernie Marcus, Georgia Aquarium benefactor and chairman of the board.

Gasper won the hearts of the Atlanta community as he entertained Aquarium visitors.

A beluga whale sculpture is being developed for the Georgia Aquarium entrance plaza.

Aquarium guests may sign memory books located on the first and second floors of the beluga exhibit.
Posted by Cats~Goats~Quotes at 8:57 AM