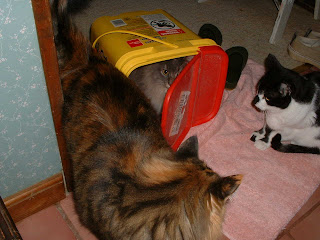 After scooping and refilling litter boxes, Timothy decided that the empty bucket would make a nice hiding place.
Anna Sue looked behind her and was surprised to see him there. Bandit is just waiting for him to come out so he can go in!

Update on my Boyz: They stood on the brick ledge until midnight, when I finally let them in the basement. They need to sleep so they can be alert during the day. I've tried to block the fence where the dogs get in. So far, so good.
Posted by Cats~Goats~Quotes at 2:36 PM